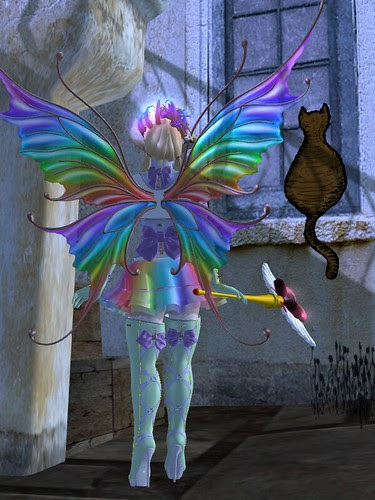 I've been having a very rough month offline, and apparently a bunch of creators are psychic, because this week they all conspired to make me a very, very happy Deoridhe. It all started with katat0nik, who had made these adorable shirts with a tulle skirt ages ago, and then made me an incredibly happy Deoridhe by releasing them separately - and including a RAINBOW one. Yes, rainbow. I know, isn't she fantastic? And isn't it a gorgeous fade 'round the sides, smooth and clean without any of the colors becoming muddy. She released a shirt to go with it - with a pretty rainbow heart on it, and that isn't mesh so it can slide under just about any top; I'm seriously hanging on to it for ever and ever. With mesh separates, having some system layer bits to add on is incredibly important. Then, while I was still goggling over what katat0nik had made for me, I ended up taking a quick run around the Fantasy Gatcha Festival and... lets just say that I hit rainbow multiple times over.

At the top of my head is my incredibly lucky score from De La Soul in the form of a crown of thorns that I had loved the first time Charlie showed it to me, and which I'm so glad he released now. The Super Ultra version has a HUD in addition to the horns, and a gorgeous hanging gem. The glow makes it a little difficult to see the details - I'll have to do another show off of some of the other options - but they are delicately formed and gorgeously made, with tiny gems hanging down from each of the horns. You can modify simply everything on it, from glow and shine to texturing and they remain editable so you can also tint them. This is the Ultra rare, though; all of the colors are available in separate commons and rares, too, so if you're aiming for just one color combination, that's the way to go. 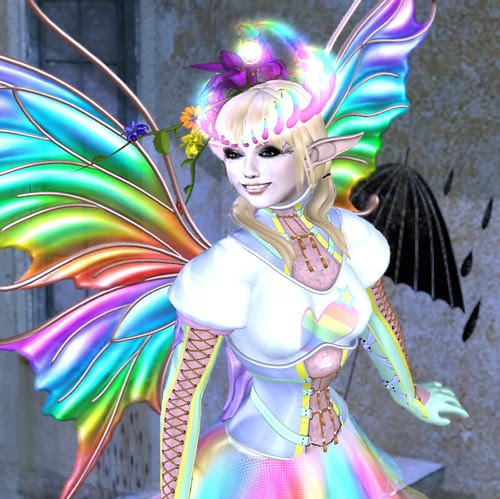 The final cherry on my rainbowgasm of a look is something you are likely to see several times again in the future - these amazing wings from Deviance. Now, very recently you all saw me wriggle around like an overly excitable puppy when I saw her last wings, and can I just say that these are even better? Delicate, curving, with a delicious ruffled edge and curving veins. They don't flap like her other wings do, which is understandable since they're a gatcha prize, but I am completely in love. The rainbow ones aren't even her rares, too; her rares are a gorgeous set with little butterflies settled along the edge. I cannot express enough how much I love these; I was in all-caps mental breakdown for the first five minutes. ICly, Deoridhe has always been a rainbow fairy, and one of my quiet pains has been that I didn't have non-glamoured wings for her which I felt really fit her. Now that has changed completely.

I rounded my look out with three things from my inventory, some of which I've owned for a while. All of the corseting is from Rosal and is part of the same set - Unmei. It comes with a HUD which lets you tint each part of the corseting separately, so while it was time consuming to render the corsets vaguely rainbow, I think it was really worth it. Tucked in among my horns is a hat from Split Pea which I picked up a long while ago and which spreads the rainbow love across several flowers. I also really liked the shadows it cast, though they were hard to capture in the pictures. And finally, this amazing Love-Love Justice wand from Curio Obscura, which makes me giggle every time I see it, or even it's name. It's like a world of Cardcaptor Sakura and Sailor Moon all wrapped up with a bow. 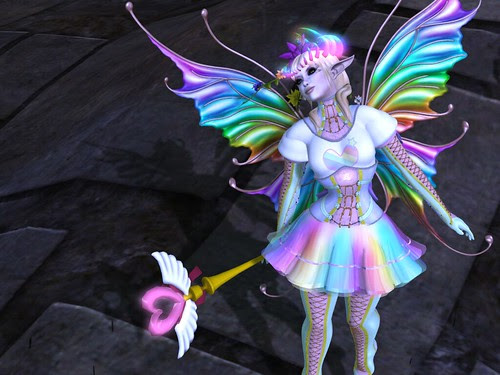 Photographed by Deoridhe Quandry
Post processing: Cropping, only
Posted by Unknown at 6:56 PM