I spend a lot of my time in Second Life chatting on groups while physically at some distance from most of the chat participants. It is rare, in fact, for me to be around a lot of people. Not only is the lag mind-blowing, but often what I'm doing is the sort of dull stuff that freebie whores do - stalking lucky chairs, doing hunts, and building. Okay, building isn't a standard freebie whore thing, but it's a solo thing I do.

There is a dual, or even more, reality to Second Life. There are the local images and chat, which are often in concert, then a series of chat groups which exist entirely in text but often have a life of their own. The chat group I mess around in most has a definite fictional geography which has no visual analog, even as Second Life itself has no physical analog outside of bits and bytes.

But as time goes on, I began and begin to find myself seeking people out "face to face" more often. Here is a picture from a couple of the earliest of these chat-inspired gatherings. 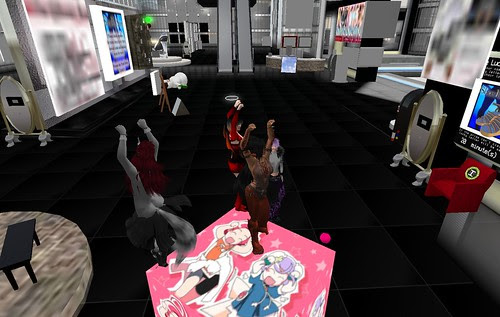 Description: Three individuals on a box in silly poses with a forth in the background.

A recent acquaintance, Azure, mentioned Caramel Dansen - and I expressed a complete lack of comprehension of what this meant. Rather than send me a like to a YouTube video, he had me teleport him to where I was (mid-hunt, mind, which is why we're in a store) and dropped this box - the caramel dansen box. You sit on a pose ball and do the dance while the music plays endlessly.

I expressed my glee both in local chat and in the group where this came up in, and in a disturbingly short amount of time several other people had requested teleports as we sat in a store and did something entirely unrelated. I felt vaguely guilty, but was giggling like a moron at the same time.

And thus began my adoration for sudden and impulse gatherings.
Posted by Deoridhe at 6:34 PM 1 comment: