Day Six: Why The Hel Did I Agree To This 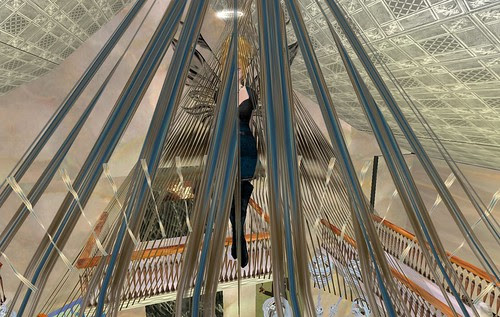 Description: Floating blond female in what appears to be a tent of lines.

I ran across Random Calliope's stuff long before I ran across his stories - particularly the awesome Slither set which I wear regularly (I adore snakes). It took Tomoyuki, a dear parson, to introduce me to Ode, though, and the butterfly hunt (I have most of the sets that are always available and have failed spectacularly to get to any of the events. I drool over the butterflies in the little house REGULARLY and gnash my teeth.) which lead me to reading his awesome book of history and tracking down his hunt.

The hunt where this photo was taken.

And which I have spectacularly only found one item.

It's very pretty, though.

I also have a set of his pearls. I lust for the rest but keep getting distracted by dresses. Damn you, reality! Give me an unlimited balance! DAMN YOU!!!!!

I'll probably hunt again, but I'm kinda hunted out. I like some of the stuff, but the lag is really getting to me these days, and I am not in the best of moods.

If you don't know about Ode, take my word for it - go. It's one of my favorite places to take pictures, too!
Posted by Deoridhe at 10:52 PM 1 comment:

Day Five: I am, if anything, tireder.

The post a day thing said any level of quality. 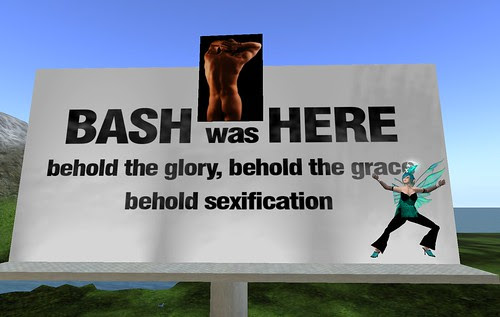 Day Four: I am a tired Deo

I am a tired and sleepy Deo, so this post will be even LESS funny than usual. Strap yourselves in, ladies and gentlemen (let me dream ;) ). 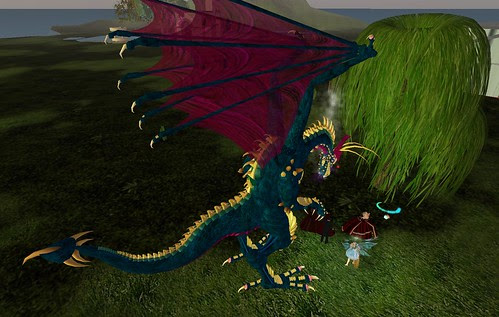 Description: A large dragon menaces a group of women in long dresses.

Once upon a time, in the magical kingdom of Beau, there were some girls in pretty dresses, a guy in a suite, and a dragon. The dragon attempted to be all scary and roary. 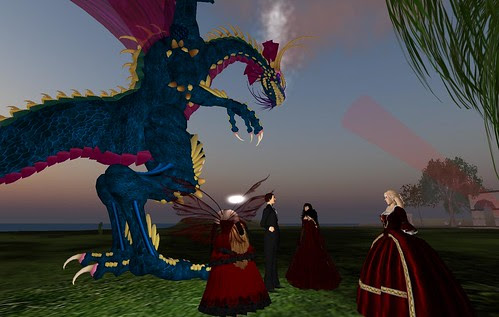 Closer view of the grouping of people - three women and a man - being dragon-menaced. One of the women is headless.

Somehow, he just didn't seem to scare them much. 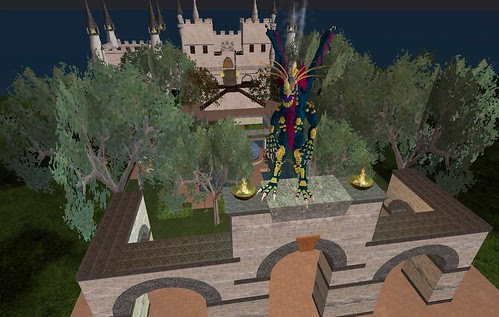 Description: Dragon menacing a castle. Or posing in front of it.

So he went off to live in a castle in the clouds. 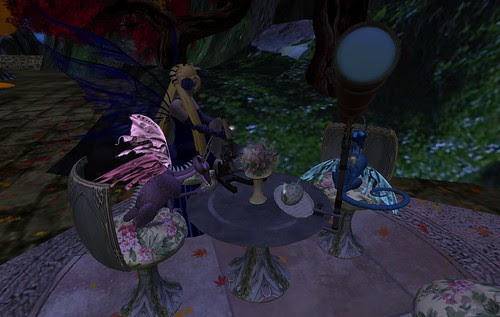 Description: A tea Table with two dragons sitting at it. A female figure is behind. It is extremely dimply lit.

Somewhere around the four months in, I started exploring new places. I have no idea how I ended up in the place where I took these (extremely badly lit) pictures, and I'm still sad I didn't landmark it. It went across several sims in incredible sprawling glory, including hidden areas and enough art and items to make me swoon. This was also one of my first experiences with trying to make the environment and my avatar co-exist; an early start on what I do now in my "photo shoots". 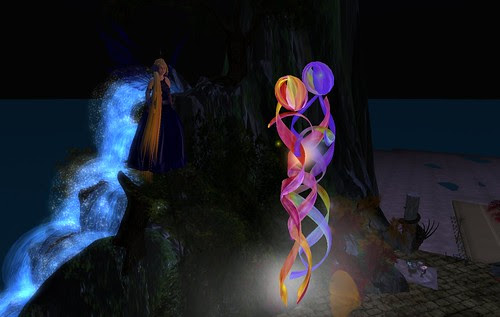 Description: Sculpture of embracing orange and purple figures. A figure in blue floats behind next to a glowing waterfall.

Some of the art and imagination in Second Life is amazing. 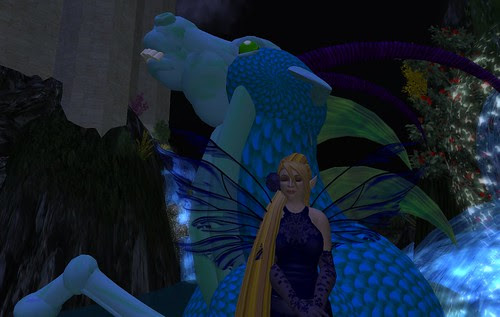 Female figure sitting in front of the head of a hippogriff.

I think one of the other things I find amazing is the mingling of natural and supernatural elements, and the sometimes seemless blending from land to sea to land again. 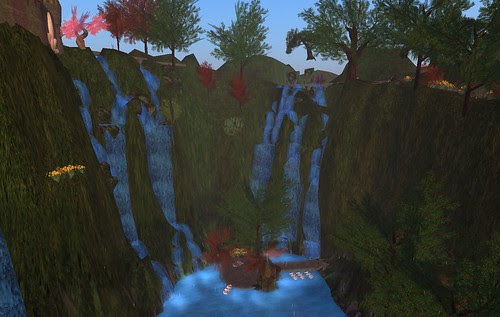 Valley with several waterfalls into it and an island at the pool at the bottom of it.

I could live here and be happy.
Posted by Deoridhe at 8:39 PM No comments:

One of my other early finds, and probably the biggest one in terms of who I spend most of my Second Life time with now, was the chat group of Falln Angel creations.

Azriel, Tomoyuki, and Sin all do their best to set a tone of being a friendly, supportive, creepy family. Think Addams Family. Acceptance is high and important, but so is a sense of appropriateness and manners. 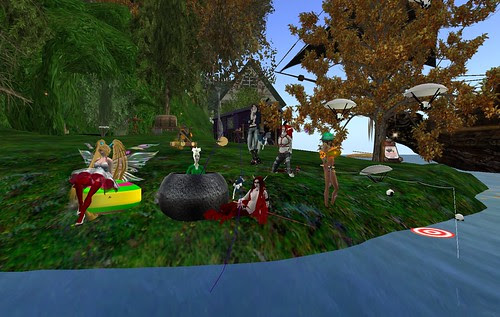 Description: A gathering of people by the water, many of them with fishing rods.

I was nervous at first when I started meeting the "big names" in the chat. I've been thinking a lot about fame, and how it works, in the wake of some interesting ripples across the SL blogosphere around fame, what it is to be famous, and power in a virtual environment. The biggest influence on SL is social pressure, and I think how people react to the pressure of the social groups they are a part of and want to be a part of reveals a lot about how powerful the human need to gather and group is.

I've also been thinking of my response to people I think of as important, but not important in the 'can fire me' or 'can arrest me' sort of way; rather powerful in the "I hope they like me" sort of way, which is very different, and which I've been at the other end of. And sometimes I like the people who want me to, and sometimes the attempts on their part to be likable are what make me not like them, and sometimes I simply don't like them for some reason. There is part of me that can intellectually acknowledge that same dynamic toward people I want to be liked by, but I can also feel the pressure to conform to what I hope they will like in order to be liked and likable.

It's complicated and mostly invisible, carried on vague, half-thought experiences and decisions.

The picture above is the first time I met Morion and Azrael pretty much ever (Mori was so intimidating at first and now I feel the endless urge to cover him in glitter; aren't relationships a funny thing?) and one of the earliest meetings of Azriel. onionpencil I had 'played' with a couple of times and Chere I didn't know at all. I can remember being very aware of the social dynamics and trying to suss out the layers of influence and relationship before I went blundering through.

Right around this time, I also took part in one of Azriel's amazing - and difficult - hunts. 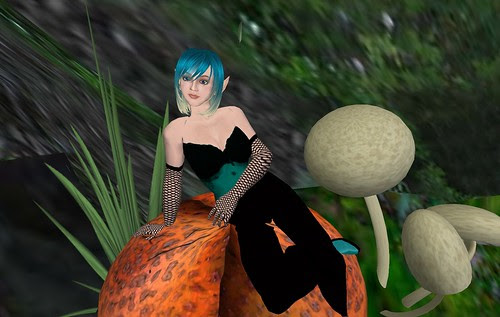 Description: Woman with short teal hair on an orange mushroom.

It was also around the time I began to play with the poseballs other people left behind to influence my photography.
Posted by Deoridhe at 12:56 PM No comments:

This is part of the The Big Bad Blogger Challenge for June, started by Alicia Achenaux.

I've mentioned before that I made friends pretty quickly in Second Life, mostly through the Philosophy discussions I got into, and part of that was a lovely woman, Marya, who gave a bunch of we reprobates a place to call home for a while. 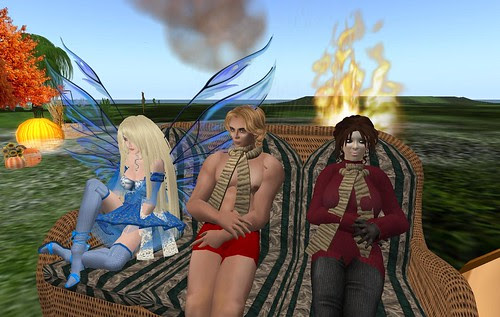 Description: Three people on a couch, outside, with fire and pumpkins in the background. From left to right, there is a woman in a blue tutu with wings and long blond hair, a man in boxers and a scarf with curly blond hair, and a woman in a sweater and scarf with medium brown hair.

Marya is not in the crowd above. From left to right you have myself, Bash Quandry (one of my "brothers" who shares the same last name), and Wren. We all lived on Marya's land and messed it up in various ways. 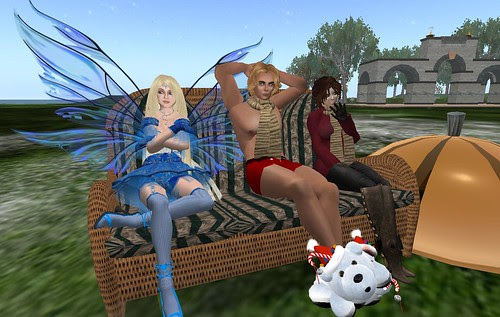 Description: same figures as above, only now angled so a castle is visible in the background and the fluffy Christmas bear slippers of the man are visible.

What this involved, at least when these pictures were taken, is our rezzing improbable things on our little patches of real estate and chatting. I hadn't really started building yet, so I was mostly working with free stuff I had gotten from hunts - including this couch. 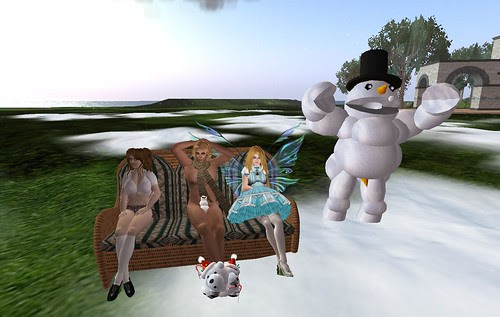 Description: Same three figures as above, but in a different order and clothes. On the left is a woman in a schoolgirl outfit, in the middle is a man wearing a snowman over his penis, and on the right is a woman wearing a Dorothy-in-Oz style dress. Behind them, in front of the castle, is a giant snowman with a carrot placed anatomically correctly.

I'm sure this could have led to many deep, philosophical discussions, but often it just seemed to lead to incongruous settings and dick jokes.
Posted by Deoridhe at 3:31 PM No comments:

I'm jumping out of the "yay lets revisit the happy past" pattern for a very important post. 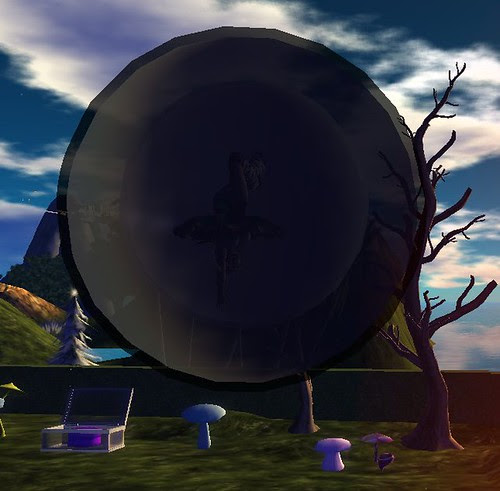 Description: A huge grey bubble is in the middle of the picture, with the silhouette of a figure inside. The surroundings are quite bright and pretty.

Revel in my exclusivity! You can't even see what I'm wearing!!! 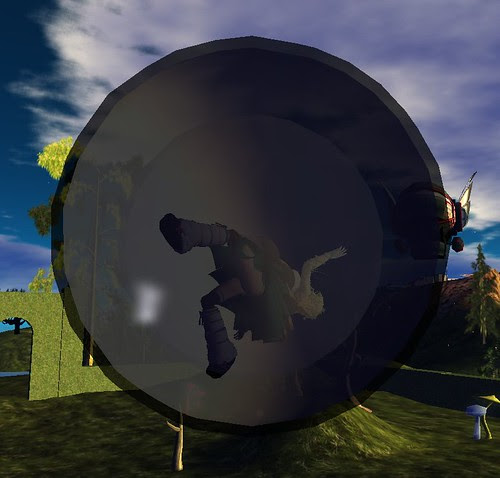 Description: A huge grey bubble is in the middle of the picture, with a slightly easier to see silhouette of a figure wearing a dress inside.

You can't tell, of course, but all the poses are the result of a recent splurge due to the Long Awkward Pose sale. 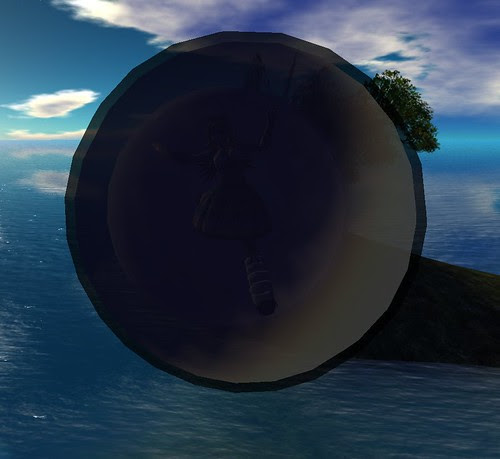 Description: A huge grey bubble is in the middle of the picture, with the silhouette of a figure inside. The surroundings are a sea with a little island on it.

Thank you, Emerald, and your friend Celebrity Trollop for my lovely, protective bubble which yells when anyone touches me. I feel so elite. 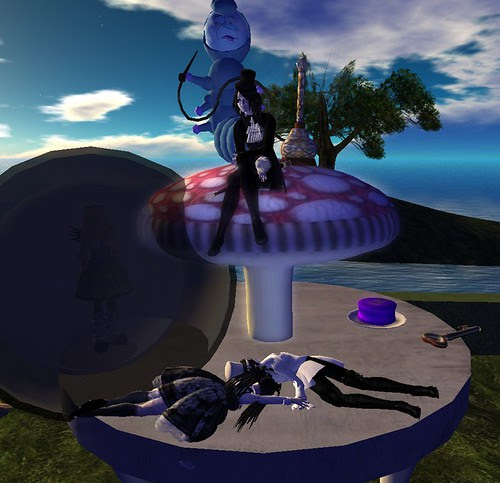 Description: A huge grey bubble with the silhouette of a figure inside is standing on a table next to a mushroom with a hookah smoking caterpillar on it. Two figures are lying on the table by her feet. A third figure is sitting on the mushroom, apparently not paying attention.
Posted by Deoridhe at 2:56 PM 2 comments:

Hunting for a Good Time 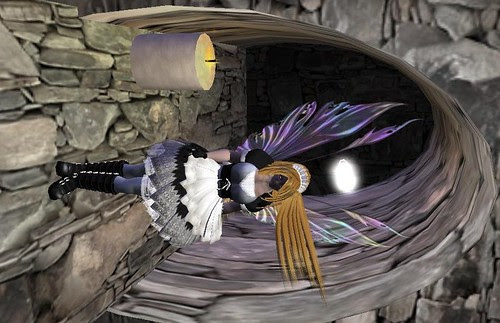 Description: A figure in a maid's uniform is standing sideways in a sideways doorway.

Some pictures speak for themselves.This one just requires a slurl.

Well, ok, a little more than that. This is a recreation of the Labyrinth from the movie of the same name, completely with Jarathy poses. The one above is Jarath near the end, when he's going all sexy-stalker on Sarah. There is also his throne. 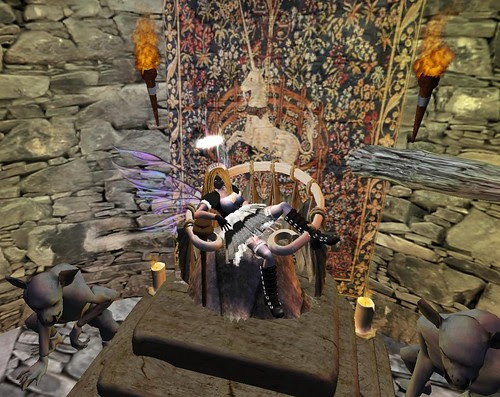 Description: Figure in a maid's uniform sitting on a bone throne in front of a tapestry.

This set of pictures also marks my beginnings in the chat group, Falln's Angels, of which I am a loud (and annoying and prone to feeding people) member. Moderated by the lovely Azriel, the amazing Tomoyuki, and the mysterious Sin, this chat is one of the high points of my time on SL and has led to many friendships. 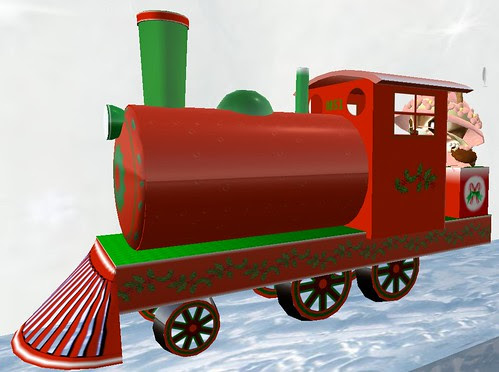 Description: A chipmunk avatar in a pink outfit is driving a red train engine.

My other big hobby which began around this time was Treasure Quest. Predating many of the grid-wide hunts, Treasure Quest is a bimonthly (or more) hunt with hints across between fifteen and twenty five sims. The chat group is a hoot and the hunting can be really fun. I particularly like the intricate and beautiful hints we often get. 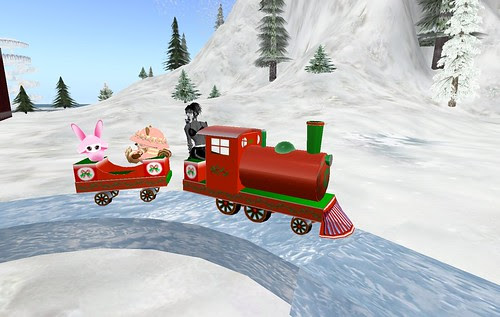 Description: Same train engine as above, but this time it is being driven by a pale skinned girl in black and pulling a car. The chipmunk in pink and a pink egg creature are riding in the car.

The final stop is always on Treasure Quest Isle, which they redecorate multiple times a year in different styles. I missed taking photos of earlier iterations, but this was the winter set and boasted a train which drove all the way around the sim (see my Flickr for more pictures).

As you can also see, in terms of photography I still mostly sucked. 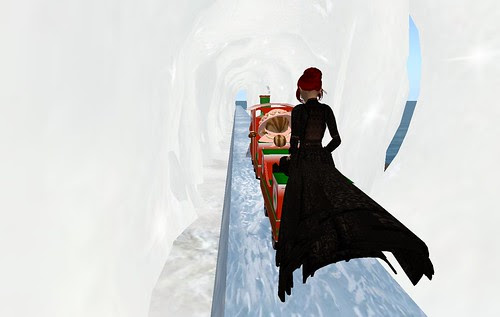 Description: Same train as before, pulling a car. The chipmunk in pink is once again driving, and this time a redheaded woman in black is riding. The angle is behind the train as the train goes into a tunnel.
Posted by Deoridhe at 4:57 PM No comments: