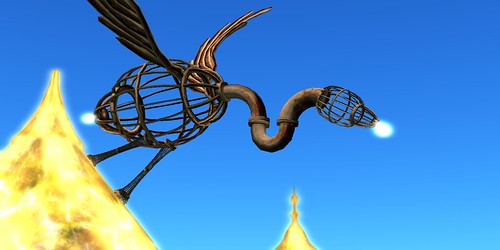 Fallen Sands is a desert realm with a metallic edge and a slew of mechanical creatures lurking among the cacti. I tinted the water green, like the heavy water found in other deserts, and set off to explore the onion towers and lead glass. Overhead, enormous iron flamingos fly, casting long shadows on the ground. The buildings are high and slightly angled, with pure glass tower tops on each corner. Those who went before have left behind only their skeletons, engaged in a wide variety of unexpected activities! My favorite were the elephants, though - either blowing water into the air to cool passersby, or cooling themselves in the dense water at the heart of the sim. 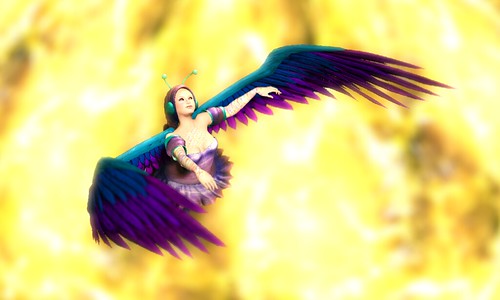 My wings, from Spider Productions (Fallen Sands), are enormous and move both via an included HUD and flapping when I fly, which gave me a lot of photography options! The wings themselves aren't editable, but there is a HUD which allows for individual tinting of several layers of feathers, front and back. You can buy the colors separately, either in sets of hues or as a fatpack. The wings also come with an AO which can be turned on and off - and it's quite a nice one! One final touch - three different sizes! One of my laments is not having wings large enough to be plausible; the large version of these wings almost accomplish that! As a final touch, there are several gestures included to trigger different animations. All in all, if you want angel wings with a lot of variety, this is an excellent place to start. 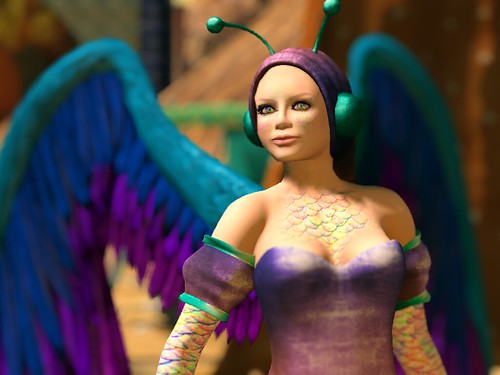 My outfit from Poet’s Heart (Fallen Sands) caught my attention as soon as I realized it was colorful insect themed dresses. I'm wearing the Flower Beetle one - an ombre of purples, pinks, and teal - but there is everything from a rich black to a bright red! They're to be worn with the Maitreya body, so don't include an alpha layer. It also comes with wings, insect wings this time with moving or static options, and has a distinct pixie style. I'd love to see these sized for petites, too; they'd really be charming! The hat, complete with antenna and eyes, are included as are the boots with their fluffy leg warmers. I may be two limbs short and entirely lacking in exo-skeleton, but I'm definitely the cutest beetle around! 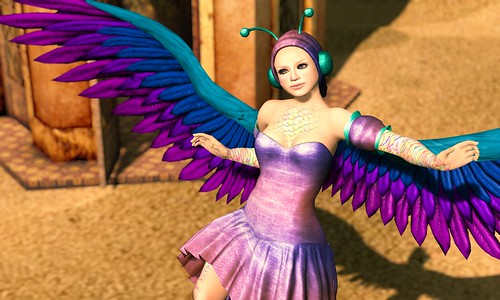 The final, not at all insectoid touch is this tattoo from Stix (Fallen Sands), which may be returning when I'm getting in touch with my scaley roots. It's a fun addition and comes with appliers for omega - which means I was able to accomplish this seemless flow from my Maitreya body to my Slink hands. The nice thing is, it offers a variety of tint options from 25% to 100%, and it covers the whole body including adorable freckles in rainbow for the face. This is definitely moving into my mermaid folder to stay! Swing by Fallen Sands soon to check out everything available under the sun, and a few things in the shade! 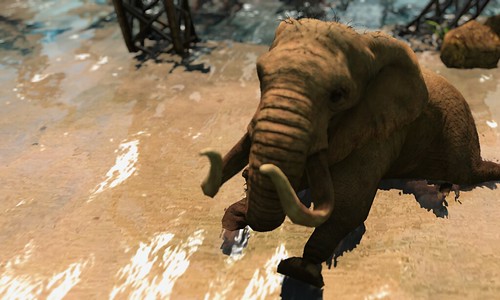