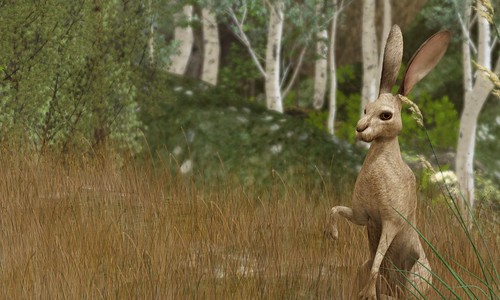 Centering on an enormous clown head, the carnival set up in Anansi has many attractions and even more contrasts. The landscape itself is sweet, pastoral, even medieval - a jackrabbit pauses to watch passers by in a field of gently drying grass; a bridge made of woven logs offers passage over a shallow waterfall; ferns and mossy rocks frame a loose stone pathway up the hill - and hovering over it is the mastermind clown with his army of eight-legged attractions and their flying ant attendants. His rictus of a smile is only visible when you crest the hill, and he hangs over the bay like a malevolent but cheerful majordomo. His minions dot the landscape, all but lost against the landscape, and now and then a crowd gathers at the main stage to play out the next part of the NeoVictoria Storyline. 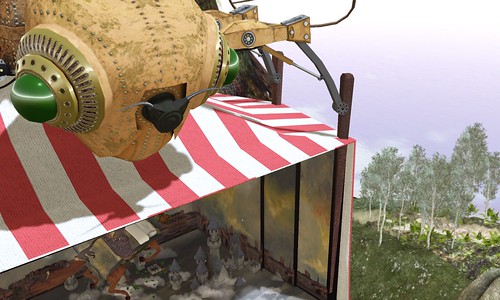 There are fewer stores in Anansi than in other sims, so the extra stages have been turned into the playthings of dreams - the roofs of a city overtaken by mist and a flying bed; orbs of glowing ideas; incongruous rainbow unicorns engaged in farming; a world entirely dominated by cats. Even some of the stores themselves sink into the dream of an enormous travelling carnival, reproducing their own miniature worlds within the confines of a circus car. At the last car before Egregore you'll find some free caravans for continuing on your way, and an invitation to sit and dream a while in this candy colored world with it's questionable core. It's a simple but lovely gift from S&S Sculpties. 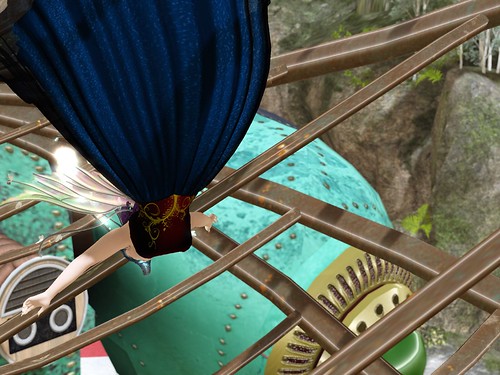 As is my pattern, I dressed up in Anansi clothing while photographing Anansi itself. My dress is a two piece from Moon & Back (Anansi), which meant I could pair a different shade of the top and bottom to create a more interesting look. You could also pair one half with another mesh piece that stopped at the same point, though that's riskier! The texturing is quite good, with a subtle glittery effect that's lovely. I particularly like how the skirt is built, though, with two layers - one sheer and one not - which allows for a lot of variation and a good sense of depth. In some of my pictures you can see the fade between just the sheer and the sheer over the solid skirt and I really enjoy the effect it has. 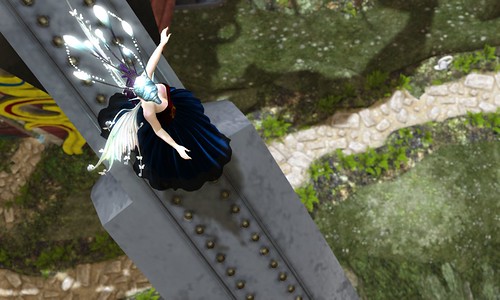 The incredible mother of pearl headdress I'm wearing is from Apparition (Anansi) and it is a striking addition to any ensemble. The headdress can be worn low on the forehead, as I am, with an appropriate hairstyle (I paired it with a fantastic new hair from Discord Designs, a semi-hawk which doesn't threaten to cut into the headdress' curving sides), or placed higher onto a hairstyle which is more piled up. Since it's modify-ok, you can also play with the levels of glow you want from the curving ends as well as resize and move it to make a stunning facinator that would turn every head in the ton. The texturing is gorgeous; I've always had a soft spot for mother-of-pearl and the whorls of the texture work very well with the more angular shape of the full shell. The angler-fish style tentacles make it a challenge to photograph, but also add to the effectiveness of the whole piece. 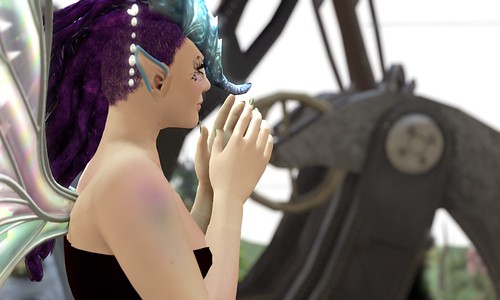 I finished off my fingertips with one of the polishes from The Purple Puffin (Anansi), a soft gold which complemented my ensemble without being overpowering. It's one of nine shades on the HUD, and there are three HUDs for sale with different emphases. All of these and much, much more are available at the Anansi sim in the Fantasy Faire for it's duration! 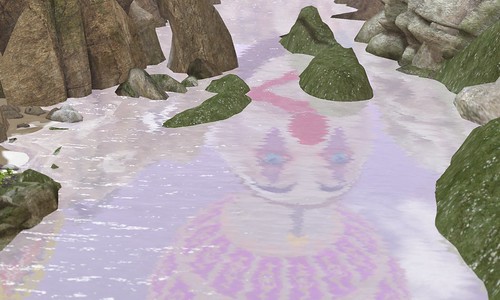