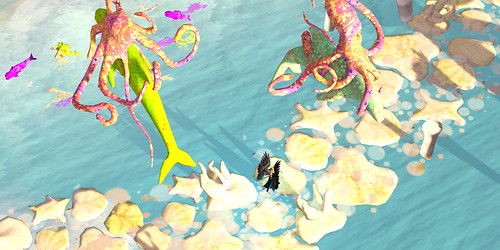 Opal's Flight is a sea of whites and cream with the flash of glinting bright creatures strewn throughout, much like the hues of a milky quartz in the sun. Like last year's Haveit Neox and Lilia Artis build, it has an organic and quirky design - even the whites mottled with texture - and there's a sense of movement even in the still pieces. There are moments both grand and small - one of my favorite details was in the meeting of a metal flamingo from Fallen Sands with a Neoxian Paper Goose, complete with a gear gift. Its a subtle but endearing touch, bridging the edges of the disparate Fairelands with the shade whimsy of the Faire itself. What was most transfixing, however, were the leaping fish and cetatean riding octopi, rendered in gorgeous hues of bright purple, warm orange, and lime green. They leap among the relics of enormous coral, many of their leaping speeds sufficiently off from each other so that the tableau is ever-changing and unpredictable. Capturing the full effect is impossible in still photography, but I had fun exploring the angles of various leaping things as they moved in and out of view at a dreamlike pace. 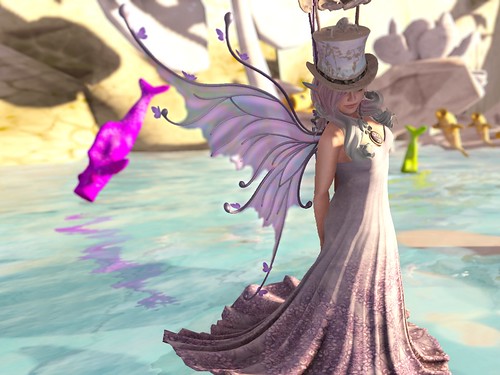 Opal Flight is the Art and Entertainment sim, so it has to make spaces for the various dramatic events and for seating the crowds who want to enjoy, and this year's solution was incredibly clever and quite beautiful: a wall of  vines whose leaves support tiny orange pillows for each visitor to enjoy. At first I thought they were giant orchids or some sort of trumpet flower, but I was delighted when I realized their actual purpose. I love the use of color here on the surface - slight but brilliant so that it makes the white seem that much more brilliant. It also makes the contrast between the surface, mostly bleached pale, and the vivid depths that much more impressive. The cacophony of hues in the parade from last year has been revisited in brightly colored fish with wide stripes of white. They're pulling carts of glowing eggs past the impatiently waiting, semi-translucent centaurs guarding the heart of the sim to a hot pink swirl of fish and mermaids. In the back of the cave is a gift from Haveit Neox, so it's definitely worth exploring the whole underwater realm! 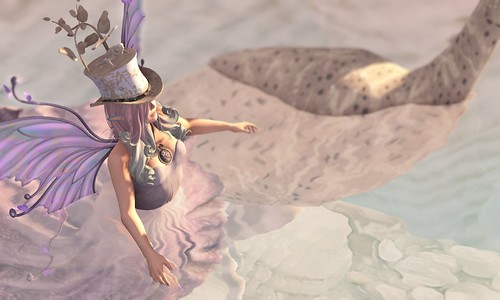 One of the tricks to balancing a busy, artistic sim is a simple, artistic look in complementary hues, and so I began with this gown from Enrapturing Elegance couture (Fallen Sands). It's a single size, so try the demo if you're unsure, and comes with flowers for your hair, a set of patterned wings, and some flexible flow for the back - but I simplified it down to just the gown with it's striking neckpiece. The silhouette is particularly fine, with a broad and sweeping hemp and slight train which gives it a sense of drama. I particularly like the texturing, am ombre of blueish purples with a delicate pattern that almost looked like batik. 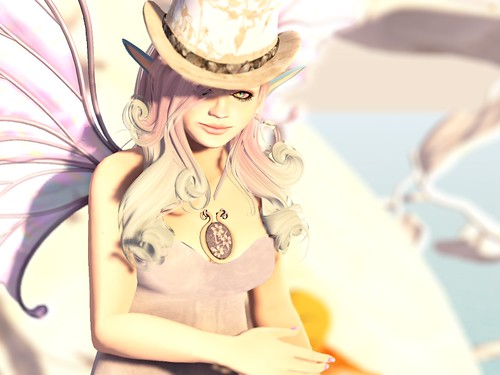 I couldn't resist adding the top hat from Haveit Neox, one of a slew of gacha-gainable hats sold in Opal Flight and Kakushi Pasu. There is one for most of the sims in the Fairelands, plus one which allows you to play the Fantasy Faire Radio, plus several goofy additions from some of the mainstays of the Faire. Opal's flight has three in the offing, of which I landed two (If you have Opal Flight's Wizard hat or Dawn's Promise - call me!), and each of them take different elements and textures from the build to make something truly fun and memorable as an inexpensive keepsake.

A short while after this post went up, Haveit Neox contacted me to credit Lilia Artis with the ideas behind the surface build. I'm including his specific comments about how much he valued working with her, and what specific ideas were hers.


"I wanted to let you know that most of the sea level is due to Lilia Artis' plans. She collaborated with me again this year. It was her idea to have the white opal color above the ocean, and to have the seating for the stage a collection of giant vines. It was her story, so I enjoyed following her lead. We both worked pretty much equally on the project so it's difficult to know who did what... which I really like." -Haveit Neox 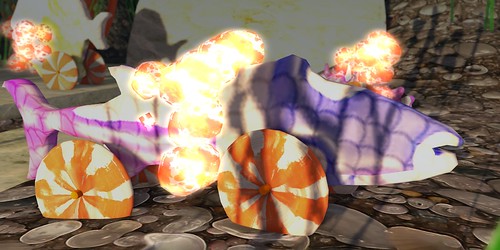