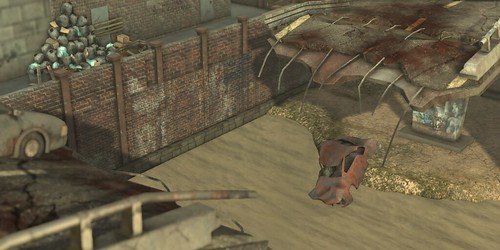 The transition between Kakushi Pasu and San Mora is abrupt and startling. On one side: calm and natural glory. On the other: post-modern destruction decorated with trash bags. Death Row Designs always does something post-apocalyptic (whether modern of medieval) and San Mora is an exemplar of the style. You can pick up a free gas mask from DRD (San Mora) at the entrance, and I recommend doing so.... just in case. Much of what you can purchase here is similarly modern and dystopic - and it's a good reminder, to me in particular, of what an enormous umbrella Fantasy is! I'm more of a sparkles and sunshine kind of girl, but the dark and rusted fantasies other people create are no less valid even if they aren't candy colored. Fantasy Faire always challenges me to get out of my preferred areas and into something different, and I'm deeply grateful for the yearly wake-up call. 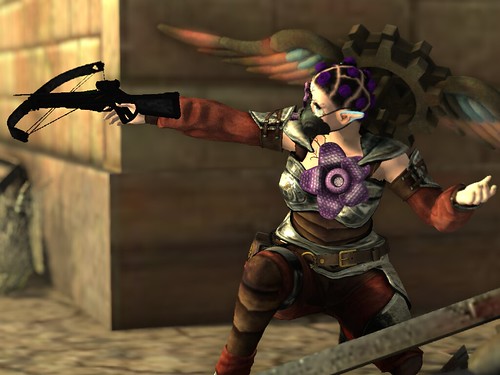 For my outfit I went full on native, beginning with this amazing Anachron (San Mora) armor. The arms, top, pants, and boots are all separate, so I was able to mix and match sizes (medium top, small bottom, extra large arms) to fit my basic mesh. I really appreciated this a lot; since I'm an hourglass instead of a pear in world, I often end up having to add an enormous bottom just to fit my enormous top! I'm wearing the rusty Fortress color but there are a bunch more, and they can be mixed and matched with ease. The whole set is available in standard sizes with alpha layers. It's well rigged, and once I found the proper sizes there was no clipping. The detailing is particularly fine, from the darker leather-like scale armor effect to the rivets on the metal pieces. For verisimilitude, this could be placed over a fabric bodysuit texture, but I went with bare skin to add to the sense that this has been cobbled together from whatever could be found. 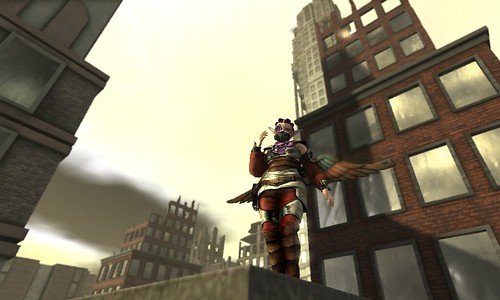 On top of the hips I added a secondary belt from The Forge (San Mora). It's intricately put together, which makes adjusting it a little more challenging, but I was able to fit it over my armor without too much difficulty. I love how it just blends in, seeming as if it was part of the Anachron set while adding dimension and a place to keep my stuff! I think my favorite detail is the fringe on the edge, though; I will always love fringe.

For creep factor I added NAMINOKE's (San Mora) giant, alien-looking blooms with their finger-like roots. These come attached to just about every part of you body, but I kept the bare skin sections only and shifted them around a little. Since each flower is a single mesh piece, resizing them to fit the available area is a breeze. The effect of even a few of them is eerie and disturbing - exactly what I was aiming for! Who knows whether these are just parasitic additions, or some sort of invading species. 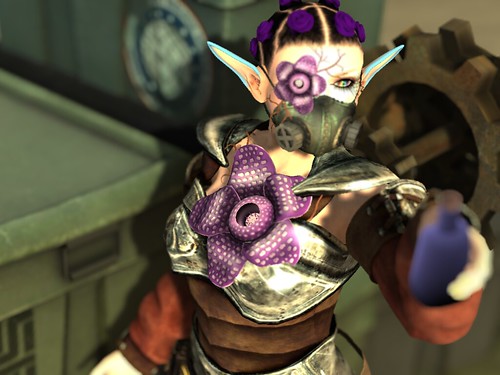 Poseidon (San Mora) brought me all of my poses, and I splurged for the fatpack of everything because these are some truly stellar and unusual poses, each of which come with appropriate props. I ended up using the Alchemist, Amazon and Witch Hunter, but there are also Monk, Shadow Dancer, and Sword Mage sets. Each pose is dynamic and unusual, several of them mid-action poses. I had a lot of fun playing with angles and shadows, building a visual story of a woman trying to survive in a poinsoned city. San Mora has an astonishing array of nooks and crannies to explore, and thankfully the tech to transfer smell over the internet isn't yet possible, so come by and explore this terrifying dystopian fantasy before it all ends on May 4th. 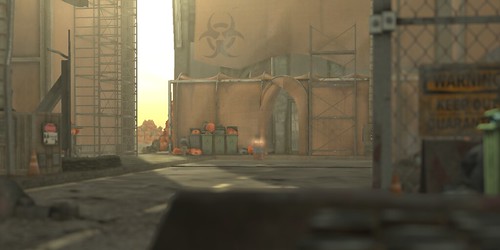