The Snow Queen is Lost in School 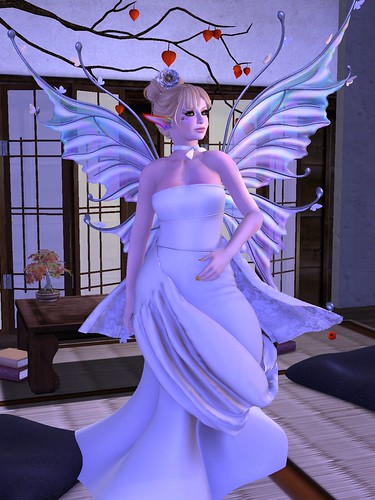 The Xiasumi School Faire has only a few hours left - and sadly I didn't get much of a chance to take pictures on the very cute sim associated with all of the sales! I did pick up quite a lot of kimono, though, and some very tasty sushi (not shown). This lovely gown is revealing and sweet, with a bodice line reminiscent of a Korean chima, worn without the blouse-like jeogori, a style popularized in beautiful manghua like Bride of the Water God. I'm an enormous fan of the manghua and the art, so was drawn to the drama of this gown from Junbug immediately, though I went in more of a Snow Queen direction with it than any proper Korean Royalty. The bow of wings in the back are more reminiscent of a butterfly tie for a Japanese kimono, and the fall of the fabric reminded me of how an Indian sari often falls across the front - though the cause in that case is very different. The event itself is pure Japanese, though, from the build of the schools, to the rows of shoe lockers, to the decorations each class did for their hallway. One of the things I love about Second Life is that I can step inside of worlds created by people for themselves and people they know, and be inspired to know or, at least, to learn more. The regular reminder that the world is so much bigger than I can ever know, with subtleties I can never grasp, is both humbling and inspiring. 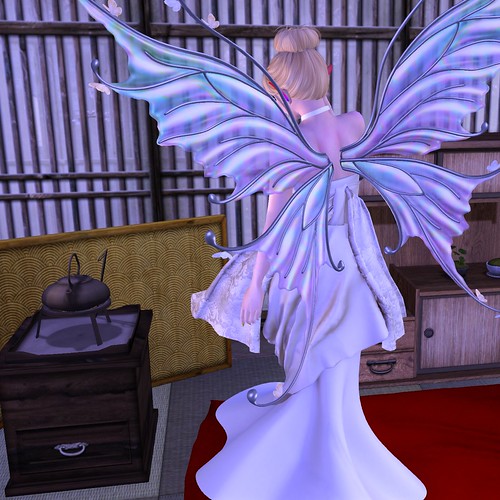 The idea of a Snow Queen is, of course, much broader than Asia; I first met this frozen ideal of womanhood in Hans Christian Andersen's story of a young girl pursuing and saving a formerly ungrateful boy, and watched with no small amount of bemusement when Disney removed most of the women from the story and yet recast it as a story of sisterly love. To keep with the theme of white - the color of death in some places, purity in others - I selected a pure white ribbon collar from Boom as one of the sole accessories. It's color changing via a HUD, including this pure shade of white, and it's simplicity would work well in a variety of genres. My second accessory is from Mandala, a large and gorgeous corsage to be worn in the hair. It's large and fat, with a bright gold center and lovingly created petals each standing out on their own - no mean feat in Second Life! Finally the hair, in my traditional gold, is a recent release from Wasabi Pills. She's continuing the trend of using small, thin mesh tendrils instead of textures with semi-invisible strands, and I love how that works around the face and ears in particular - all very hard places to place hair, as there is a tendency for layers to overlap. She also tucked some loose bits in under the bun in back, as if it's been rather a long day and some tendrils are escaping! I love both the simplicity and the elegance of this look, and I'm so glad I had a chance to take some pictures in the Xiasumi school's gorgeous build. 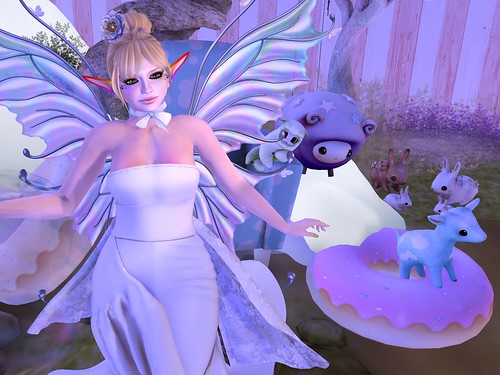 Photographed by Deoridhe Quandry
Post processing: Cropping, only
Posted by Unknown at 8:54 PM