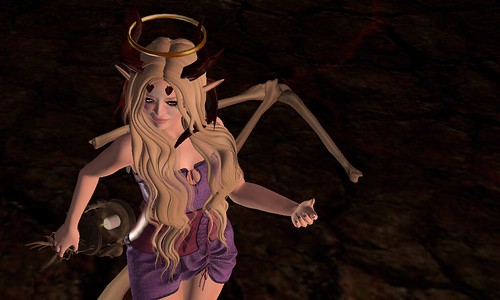 Twilight Illusion is a place of contrasts, and a broken angel seemed like a perfect traveller to go through these unforgiving and extreme environments. The demonic angel part could only come from BluPrintz (Twilight Illusion). The horns are part of a gacha - commons get you horns of various colors and the shown rare adds a halo for a really confused creature. The severed wings on my back come in black or white - I chose white but the black is equally well done. Finally, the Cerafina Heels are striking in their focus on just being the heel part, except for a band over the ankle, leaving one in a precarious if pretty situation! There's matching armor, and one of the RFL vendors sells a prism set that includes the heels. 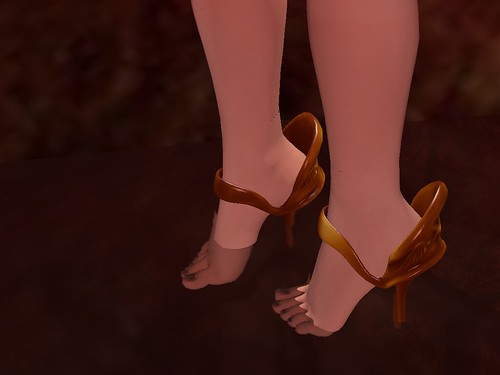 My dress and lamp both come from *Independent Objects* (Twilight Illusion) and are a lot of fun. The lamp gives off a gentle glow and has a low priority animation to keep your arm up. The outfit has a ton of details in addition to being super cute. I love the ruching at the hip and the tiny keyhole tie at the collarbone. Adorable! It comes fitted for SLink, Maitreya, Belleza, and all of the standard sizes. It also includes matching boots and pants - the pants are addible via an applier for the aforementioned bodies and look rather like a nicely textured set of tights. The patterns cut into it are amazing as well - I love the open bodice bits; it's not really a corset, but is shaped somewhat like one. The non-RFL version has a HUD to do some boot and corset color changing, so you have some options there as well. The final touch are my poses, all of them for sale by Black Tulip (Twilight Illusion). They're a warrior set, so would work well with a weapon in your hand, and they really are fun to use even with only a lantern! Every image is dependent on awesome poses, and Black Tulip really delivers! 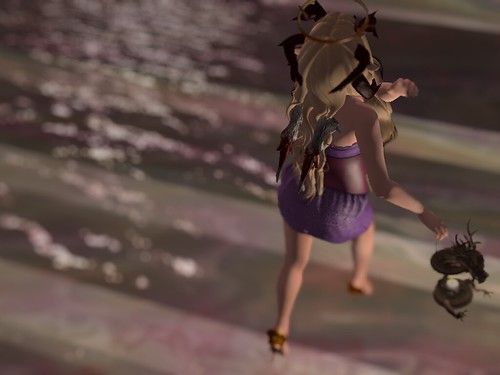 Photographed by Deoridhe Quandry
Post processing: Cropping
Posted by Unknown at 12:02 AM