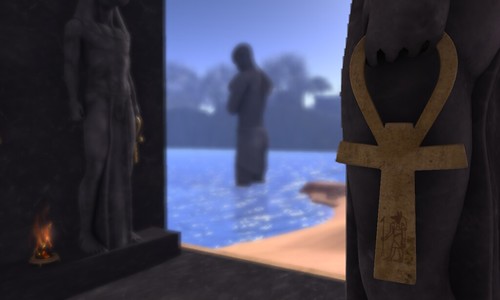 Other Stores on Sim: 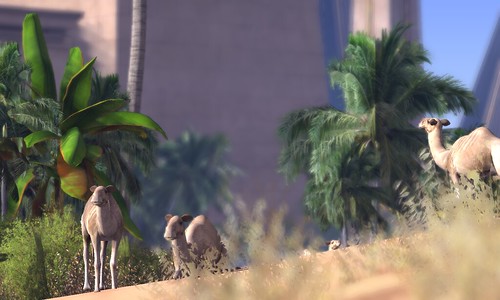 Dark Anubis guards the barriers between worlds, beside himself in dark marble and gold and holding life in his hand.  The sands beyond bake under an unforgiving sun, reeds drying where the river has abandoned them. Ahead, a caravan of camels dig their hooves deep into the shifting ground, the youngest of them monopolizing the slim shade cast by palm trees. A tent is stake out nearby for the driver left to mind them all as the company explores the desert town built around the Nile, a friendly cobra soaking in the sun nearby. This driver has abandoned sand for shore, tired feet and dusty body half submerged in the river as she watches the pretty boats carry fragments of souls into eternity, each of them in their own canopic jar. 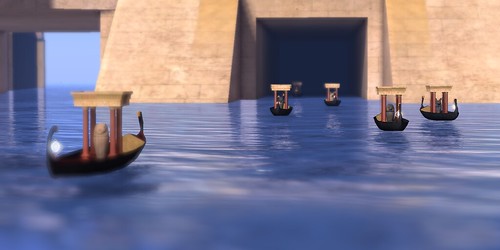 Higher above, crowds move between darkly shadowed interiors as the gods watch all without. Basalt Bastets, majestically coiled, stand tall on pillars between larger replications of Sekhmet and Anubis in relief carvings and sandstone statuary, and heads of Wadjet, her winged hood unfurled. Obelisks painted with dark pigments and crowned in gold are supported by pillars depicting Hathor and Ra, long messages on them for the dead. A layer above, crowned Horus guards pillars marked with red ocher and flanked by Sekhmet's lions while on the street scorpions skitter across stone looking for places to hide. Tucked into corners where the sun rarely reaches and walled off from encroaching animal life, fountains are built into layers and planted with exotic flowers. 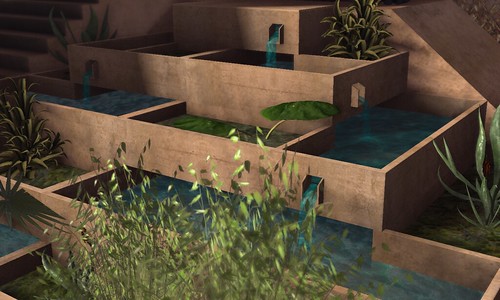 Through narrow breaks in the wall, glorious Isis presides over the waters with her wings spread wide. Out in flat plazas, shallow pools of water are refreshed as they frame overwhelming obelisks crowned in golden statues of Isis, which are then overshadowed by even taller pyramids carved in basalt with gold lettering and sandstone edges. The main temple is framed with Bastet, mirror and Ankh in hand, while Anubis as both jackal and man stands guard in solemn lines. From here is he best view of the river which flows endlessly outward, and gatherings of both grief and joy play out on the wide patio warmed by fires in shallow bowls and cooled by the river itself. Life and death, hot and cold, fire and water - it is in the place where opposites co-exist that symbiosis may emerge. 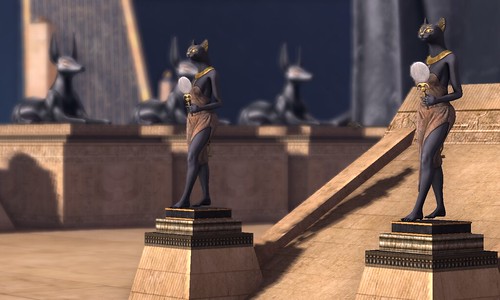