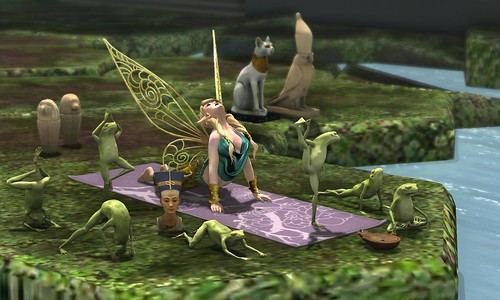 I made this entire cute scene around the secret prize around Yoga Frogs from meadowWorks (The Golden Delta) - specifically around the secret rare prize of a yoga mat, which was the first prize I received! I couldn't resist a slew more of frogs to play with, and then moved on to the Tomb Traders Gotya (aka gacha) and managed to land uncommon and rare items, but not all the Canopic Jars - I'm in the market if you have duplicates! This ended up being a totally cute and unexpected side trip through what meadowWorks (The Golden Delta) has to offer, and a few of the items which made The Golden Delta incredible.

Photographed by Deoridhe Quandry
Post processing: Cropping
Posted by Unknown at 1:12 AM