Fantasy Faire: A Traveller in The Golden Delta 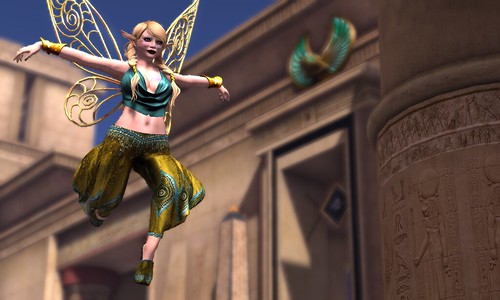 The Golden Delta glows under the sun like a jewel, and the wonders available there are equally glorious. Beginning with one of my favorite hair stores, Wasabi Pills (The Golden Delta), I have this adorable pigtail style which is - glory be of glories - perfect for my enormous ears. So often pony tails are set to be tight to human ears, so it's really a treat to have one which tucks around and under my ears perfectly. I thought they were a cute style for a jiniri, and fit the light and playful style I was going for to contrast with my more somber surroundings. The ends of my hair are tied with simple cords in two colors, and a HUD lets you color them separately. The rough and thick style is echoed in my bracelets from BluPrintz (Twilight Illusion), heavy forearm guards which work as well as jewelry as armor! The color and weight are awesome, and they really add to my overall styling. 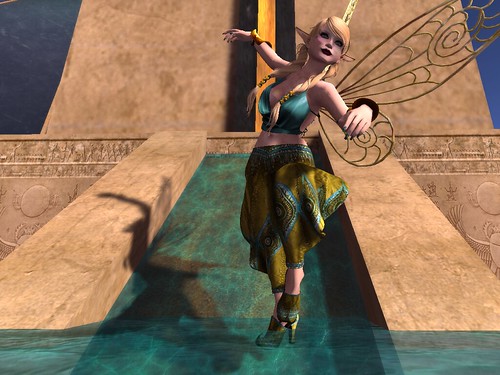 Cygnet’s Dreams (The Golden Delta) made my colorful and well made outfit, combining contrasting colors and strong patterns into a really fun ensemble perfect for hanging out in the shade in hot climates. It's a combination of a slung top, tied at several points across the back with cord, and Jodhpur-style western riding pants based on the Indian Churidar. The shape is perfect for these patterns, large diamonds filled in with swirls and cutting across the loose section above the ankle. The same texture and color shows up again at the waist, drawing attention to the curve and flair there. The top is adorable, tiny ribbons holding a smooth drape of fabric into place across my front. It's a lot briefer than my usual style, but I really love it! Both pieces are fit for Belleza, Maitreya, SLink, and Standard Sizes and I found the fit to be easy and it moved extremely well. 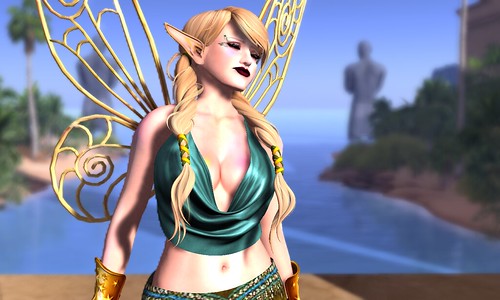 The shoes are included as well, some adorable curve-toed jutti.. I particularly like the addition of cutouts around the sides and heels which make them really unique. Indeed, the whole look has a lot of ties to northern India, albeit circuitously. The pant style came to England through colonialization, carrying the name of one of the places it was worn - the Jodhpur State which formally joined an independent India in the mid 19th century. It's meant for riding, the loose outer edge both offering options of greater movement and increased air flow in hot terrains while the inside of the leg can be reinforced with extra fabric to make it more durable.  The shoes hail from farther north, toward the Punjab region of India. Traditionally, the pointed toed jutti are worn by men, but in the illustrations accompanying retellings of middle Eastern stories outside of that area, they're equally as often shown on the feet of women. All of it is reminiscent of European retelling of Arabia, either through fairytales or later television shows, where the original pieces become combined and reconfigured into an entirely new aesthetic. 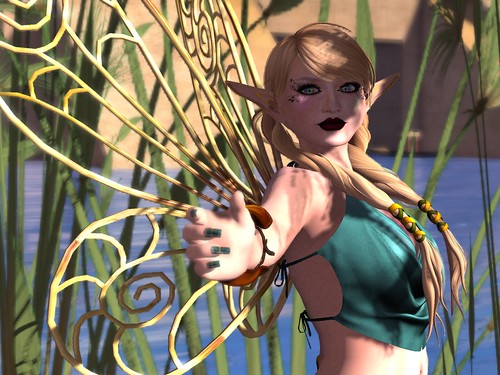 Photographed by Deoridhe Quandry
Post processing: Cropping
Posted by Unknown at 12:12 AM