A lot of people talk about how difficult it is to organize your inventory, but once you get a few basic folders in place it becomes much easier. From there, it's a matter of picking up a few basic habits, which this system will help you with.

The first important thing you need to figure out is how you decide what to wear. I start - in my clothing at least - with color, so I organize most of my clothing by color. For hair, I am most concerned with style, so I have them organized by length and style both. You'll see how I organize each type of file as I go, and hopefully these will give you some ideas for yourself - remember the purpose of organization is to be able to find the item again, so think about how you look for things. 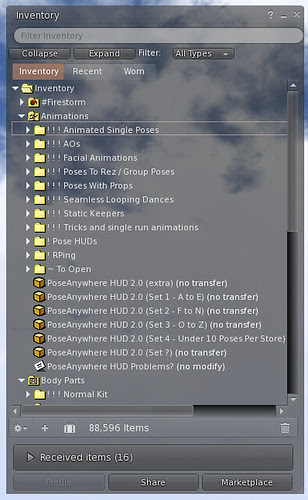 I begin with "Animations"

I differentiate between different types of poses, keeping the PoseAnywhere HUDs I use for my pictures in the main folder. 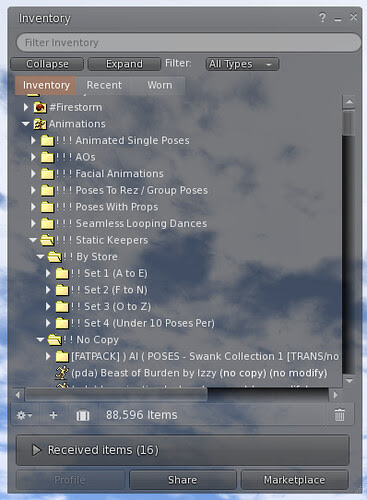 My only sub-organization is in the Static Keepers folder, where I separate some by store, and put the no-copy ones in another folder. This is because the PoseAnywhere system requires copy-ok poses, so all of my no-copy are saved for no-script sims.

See what I mean about the organization being in service to finding things? This is part of it - identify how you look for things, then organized by that thing.

At top I put what I call my "Normal Kit" where I keep the basics of my avatar. Under that is my "Basic Reset" which is literally just all the things I normally wear in a single folder, which makes it very handy. Under that is the folders where I put Avatar Extras, like horns and hoofed feet and tails, and entire Avatars. The sole exception is the petites; because I have so much clothing for them, I store them and their shapes in my clothing folder. 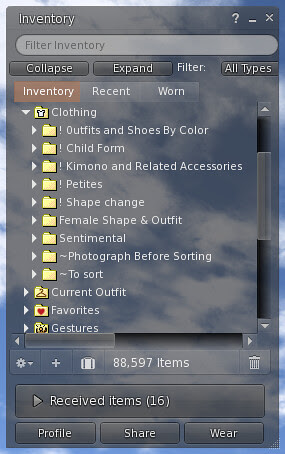 Third, and most complicated, is "Clothing"

At the top, I have the bulk of my clothing - "Outfits and Shoes by Colors" - and I'll focus on that with the understanding that other folders are organized similarly. I subdivide by colors, linking together similar shades. The metallics folder I'm slowly emptying into Orange (Copper), Yellow (Gold), and White (Silver), but it's taking a long while. My "Patterned / Multicolor" folder is similarly in a state of flux right now, half organized by similar shades and half by holidays. The other folder of note is the "Color Changing" one, which I also use for items that are color change via a HUD.

The rest follow a pretty strict hierarchy, though, and even the complicated ones follow something similar, so I'll share it below for the color "Yellow" which is the most complete, as one of the last. "Yellow" itself is broken into five folders: Accessories, Bikinis and Lingerie, Clothes, Separates, and Shoes.

"Accessories" is the most complicated folder. I broke it into nine categories: Bags / Back and Handworn Items, Belts / Shawls / Cloaks, Gloves, Head / Face Items, Humorous / Joke Items, Jewelry, Socks / Stockings, Toys / Pets, and W / Effects. The last includes particle effects and footprints. I filled these in gradually as I organized and found new things which didn't fit in existing categories.

"Head / Face Items" is the first of two categories within Accessories> that has sub-categories, which include jewelry that is not part of a Set (see below). I have it broken into: Animals / Dolls, Bands / Wreaths, Barrettes / Pins, Flowers, Food, Glasses, Hair Sticks, Hats / Crowns / Veils, and Masks.

"Jewelry" is the second of two categories within Accessories> that has sub-categories, and I have it broken up into: Sets, Anklets / Thigh, Armlets / Bracelets, Bondage, Broaches, Earrings, Necklaces / Collars, Piercings, and Rings. 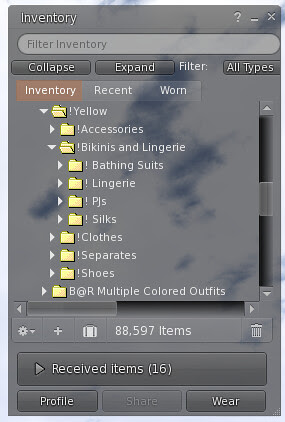 "Bikinis and Lingerie" is simply where the most revealing of my clothing goes. Someone with a more extensive collection might want to diversify, but I just have main folders of the following: Bathing Suits, Lingerie, PJs, and Silks. 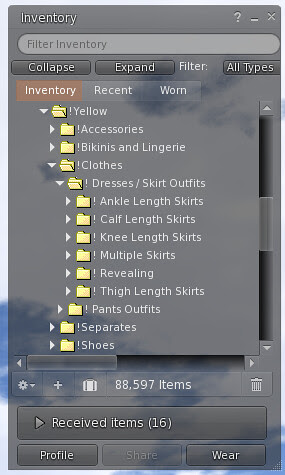 "Clothes" is slightly more complicated, and I ended up going by length (which often implies style). I organized it into "Dresses / Skirts Outfits" and "Pants Outfits" then further subdivided the "Dresses" since I have so many. "Dresses" is divided into: Ankle, Calf, Knee, Multiple, Revealing, and Thigh Lengths. I have considered breaking "Thigh Length Skirts" into top and bottom categories, but I haven't yet. 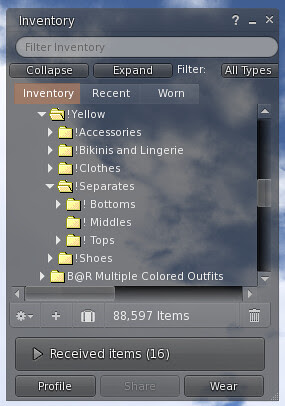 "Separates" is simply broken into: Bottoms, Middles, and Tops. I keep my corsets in the "Middle" folder, for example, and when I want to mix and match I can go here. 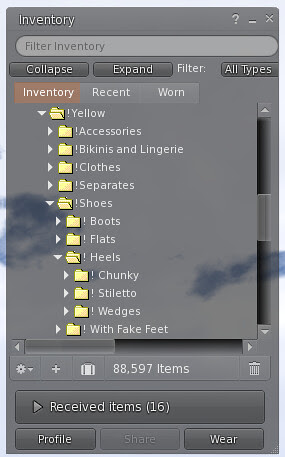 "Shoes" is broken first into four categories: Boots, Flats, Heels, and With Fake Feet (the last to guard against putting on fake feet when I am wearing stockings for an outfit). "Heels" has three subsets: Chucky, Stiletto, and Wedge. I think the different types have different styles, so that's how I divide them. Boots could also be further subdivided into height if someone had a lot of them. 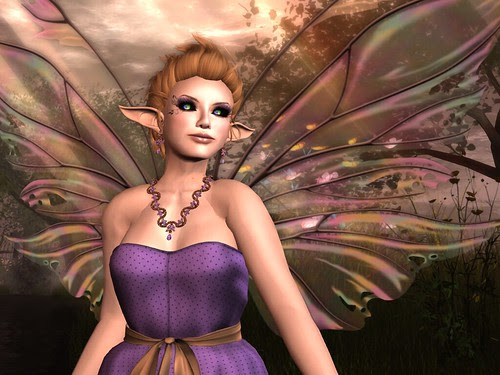 Hopefully this has given you some ideas on how to set up an organizational structure for your inventory. You certainly don't have to copy my categories, but using folders to separate things out so they can be easily found can really help when putting together a look. I'd love to hear about your categories, and how you break things down in different folders. So long as it works, it works - so go forth and organize.
Posted by Deoridhe at 12:47 AM