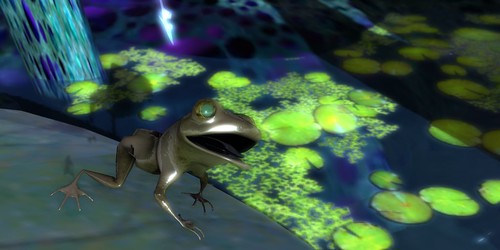 Mudrana is a fascinating build at the Fantasy Faire, built in an 'S' shape which centers in front of the Frog King with the curves of enormous lotuses serving as both barrier and building. Reeds of various shades, matching lilypads, and even differently tinted water add a three tone effect while separating the build not exactly evenly. The decor here is for sale at the Dandelion Daydream Factory, and it's striking; divided into "corrupted", "Unseelie" and "Seelie", the similar shapes are remade through colors and glow to bring a different mood to their sections. My favorite touch were the frogs, however - some of them sitting, others climbing, still others peering into the depths. It was fun running across the ones with horns or wings perched on a lilypad or halfway up a stalk of cattails. The use of movement was fantastic as well - flies buzz around the head of the Frong King, tempting him to snack, and in the depths of the water you can see enormous tadpoles swimming as they waited to transform and join their parents on the surface. 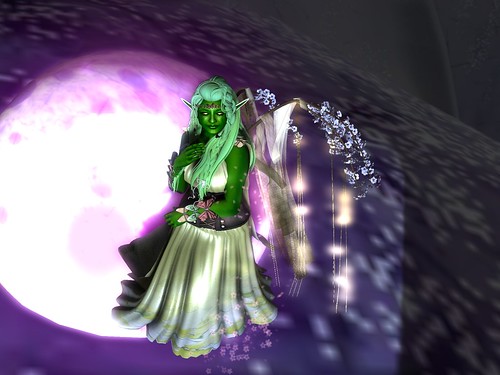 For this marshy sim with it's shiny flowers I focused on shades of green with accents of pink, beginning with this amazing forest skin from .:Soul:. (Mudrana). It's a rich green on the yellow end of the spectrum, and has slightly lighter patterns worked over it in an organic pattern. It came with three appliers in addition to legacy body skins and tattoos; the appliers are divided into head, body, and tattoo and those three appliers cover just about any contingency in three simply sets. The head applier includes soul's Uni ears, Bentbox Sylvan and Faun, and Logo ears as well as Omega, Catwa, LeLutka, and Genesis Labs. The body tab covers Slink, Maitreya, Belleza, and Omega. You can also apply just the tattoo using the omega system. The final effect, combining my standard body with Slink hands is gorgeous and a lot of fun to play with when adding hair and clothing. 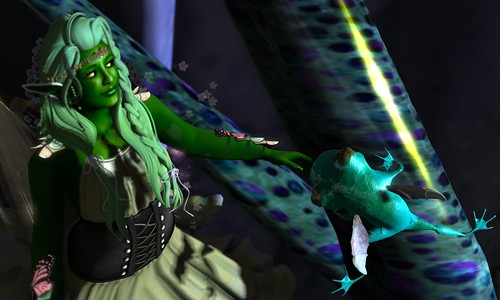 My dress is a really awesome design from [EvelineIntheBox] (Mudrana) colored in shades of dark gold and burnt umber. I love the subtle patterning of the skirt and how it catches the light without being overpowering or busy. This is a fitted, standard mesh which comes with a blindfold and horns as accessories, but I wanted to focus just on the dress for this look. It worked very well with my default mesh body despite my tending to have a different shape than most bloggers, and with the alpha layer it was all but flawless. The cape in the back is a nice bit of detailing and floats just enough above the back that it doesn't usually clip even in extreme poses. I especially liked how simple and chic it was, and how well it worked with armor detailing I added from another set. The gleam of materials was also quite nice, especially since I was going for a shiny effect instead of a matte one; this dress worked perfectly next to shimmering lilypads and the way the lilies caught the light. 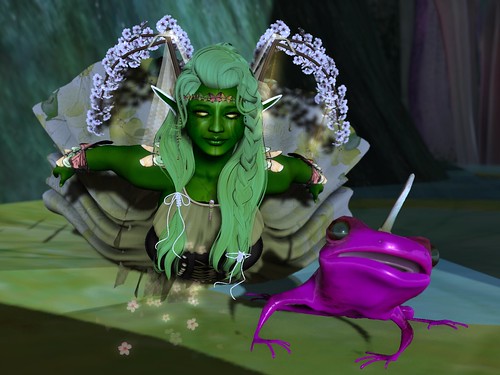 Zombie Suicide (Mudrana) provided my eyes and my necklace. The eyes are featureless except for some soft shading and can be worn as textures, via mesh eyeballs which come with a texture change HUD, or applied to other heads via the Omega system. There are twelve color options and you can color each eye separately, which seems like a lot of fun for a subtle but striking effect! The necklace also comes with a texture changing HUD, this time offering up sixteen options, some of them a single shade while others offer ombres like the green/pink one I'm wearing. I liked having the option of adding a pop of pink to my otherwise marshy look, and having these small flashes of pink were really fun without being overpowering. You can find all these things and more at Mudrana through the end of the Faire tomorrow. 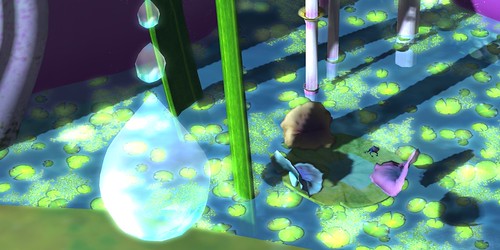