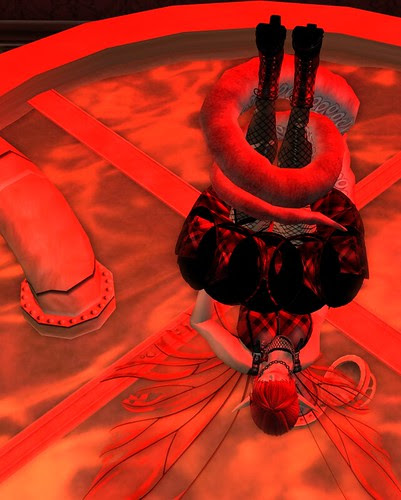 I got started on Cadmium Red later than usual, but it's a color I really love - so bright and vibrant.I went to a darker, more punk direction than I usually do - combining one of Wasabi Pill's Fairy Tale Event hairstyles with a very old purchase or win from Evldva (included hair not shown) and a set of jewelry from Ticky Tacky that I've had in my inventory forever. I love the combination of old and new - and in new news, Curio Obscura has a Lucky Chair! I've been lurking there for the better part of the morning, and began to notice just how complicated and amazing the store is. It's a giant Victorian mansion on the back of a hypno-eyed robot creature rampaging across the landscape. I went with a completely extreme color scheme, but I think the shadows and architecture hold up to it. As a reminder - outside of cropping, none of these pictures are edited; this is what can be achieved within second life with the right light settings. 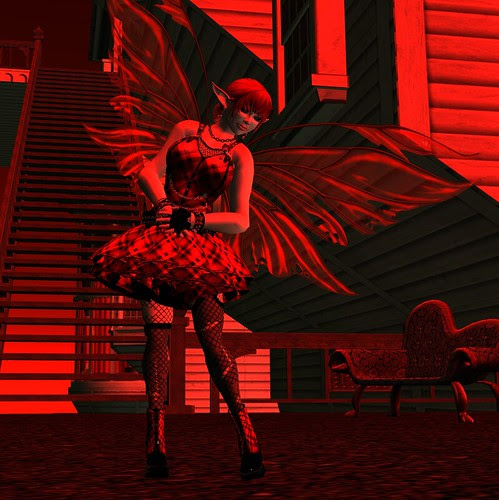 There have been a number of posts recently ironically segueing off of each other about the topic of originality. Given a choice, the majority of humans cluster and group, building up conformities with a few people excluded. In the individualisticly-obsessed Western model, this is a failure of humanity, a failure to be "yourself", a failure to be unique and special and to innovate enough. As someone who has recently started seeking out local communities to join and people to build from strangers into friends, I have perhaps a unique perspective; I want to conform enough that people will like me, want to be around me; conform enough so that I can build circles of local friends to spend time with, do things with, support and be supported by without sacrificing any centrally important things to myself. In that way, I find the grouping behavior of humans deeply reassuring; it has resulted in me being able to find local hobby groups that share my interests, within which I may find people who will like me and whom I will like. The urge to community includes the urge to conform, and this has both positive and negative implications - on the positive side, people support each other, hold standards for each other, and make each other better; on the negative side, people negate themselves, pull each other into hatred and cruelty, and make each other worse. 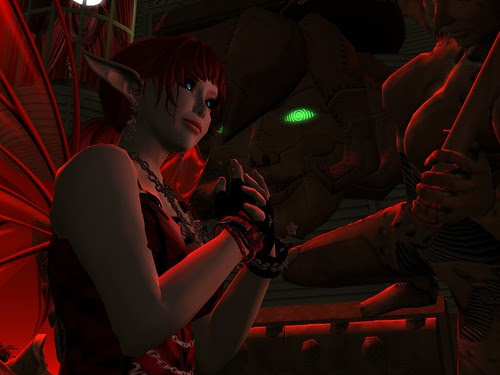