Newbie Challenge II - A and I

I have something shameful to admit - I have an alt for every letter of the alphabet.

I know, I know, get over your giggles. I plead being addicted to lucky chairs; there is something very powerful about sitting at a board and systematically clicking through it until a question mark or a D finally show up! It's saved me a lot of time on all but the group-only boards where the groups cost money; otherwise I'm set; it's also saved a gathering of people groaning out about the fifth U in a row!

One of the fun side-effects of this has been trying to set up a variety of avatars with very little money - so the lot of them are perfect for Gogo's Newbie Challenge II (and you'll get to see one "look" from each over the course of however long it takes me to get through the alphabet!).  I'm starting at the beginning - with A (in purple) - who was actually a roleplaying alt and not a lucky chair alt. Doesn't she look amazing? 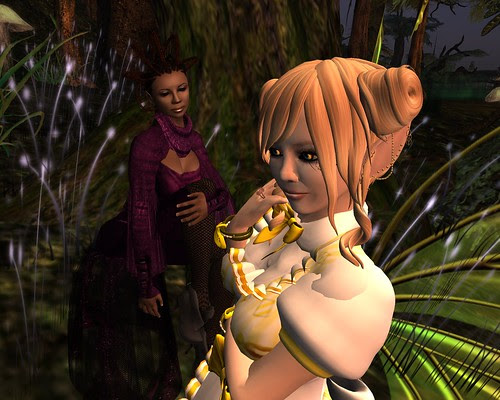 Deoridhe is rather an Aryan's wet dream, so I often try to go into completely different directions with alts - also it's more fun! A, by contrast, is meant to be Igbo (or at least Ghanese) and is in my head as my 'classy/stylish' alt. I try to dress her in semi-formal dress and modern casual, styles that Deoridhe tends to not wear and which don't look as good on her as on A's lanky frame. In my head she has a slight Caribbean accent from moving there later in life. She does bring up, for me, the question of how appropriate it is to go cross-cultural, especially when one is offline rather an Aryan's wet dream. Deoridhe is based off of my appearance - blond, blue, and pale; and while I try to not approach A with a stereotypical attitude, it's difficult to know how many stereotypes I've accumulated without noticing and then played out through her - thus disrespecting a whole lot of people who don't deserve that disrespect.

One of the things I decided when I made her, though, is that her hair would be as accurate as I could get in Second Life - so when I discovered this Discord Designs hair I was utterly in love. it's a complicated bit of braiding, and would require use of wire, but the end result is striking. Prior to this I had her in long braids, having been unable to find a shorter style I really liked and yet didn't look Asian or European in texture.Hair and African Americans seem to have a tumultuous history, so while I'm not sure the issues are applicable to a Ghanese woman, I'm aware of the dangers of sticking European-style hair in black on the head of a Ghanese woman and calling it a day. 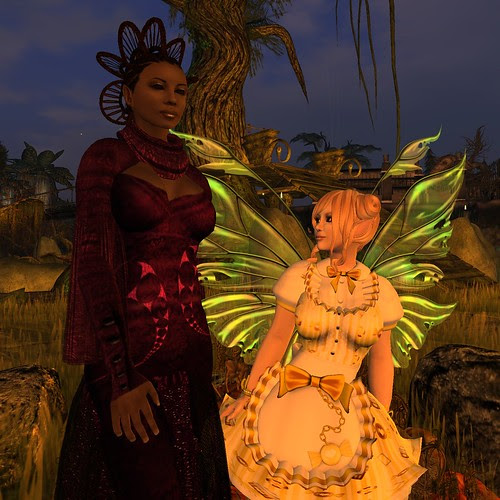 A's skin is a new player gift from Tea Lane - an excellent shade of chocolatey brown; I very specifically wanted a dark shade, not one of the lighter ones, because you see many fewer avatars on Second Life with truly dark skin. I have my eye on some other brands, but this one fits under the 550$L limit! The eyes are courtesy of Little Boy Blue and are made to seem as if the entirety of the night sky are within your eyelids.There's even a prim addition which moves, as if the sky were slowly turning within your gaze. The dress is from Pixel Dolls and is one of the lower price choices that I really love. The texturing on it is divine, and while it's one of the older offerings, it still stands up against newer clothing. The shoes are cheapies from Glad Rags. I didn't add any cosmetics, but the skin came with a bit of shine to it which I think really suits the entire effect.

The entire look came to a grand total of 510$L, but I think it looks like a million bucks! 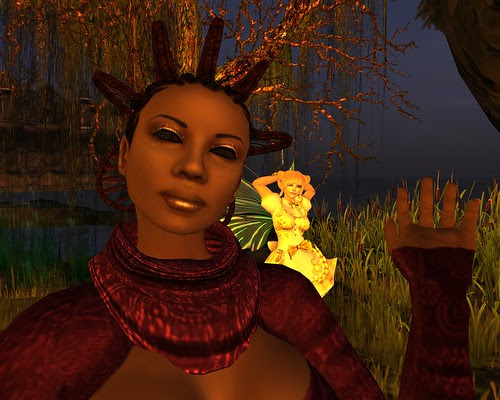