The 86 Aspects of Composition: Appropriation

Drawing from Mike Vargas' 86 Aspects of Composition, I'm looking at one aspect a week as it is reflected in the creations of Second Life Photographers and Artists. This week the topic is Appropriation, and the question is:


"How precisely and in what proportion to the whole have the ideas and constructs of others been incorporated into this creation?"

This is an excellent question for 2D art in Second Life's 2D world. Rare are the 2D artists who create everything within their images; Second Life 2D art is much closer to a collage of items created by other people than anything wholly original.

That is not to say that it isn't art, or that it isn't without merit, but the collaborative nature of Second Life is it's driving force, even when that collaboration is mediated through cash. I have struggled with calling what I do in Second Life art due both because I often took self portraits, and because I didn't really "make" anything but the combination of all of the elements. I think we limit ourselves when art becomes what is paid for and hung up in galleries, though, and bringing the deeper questions of art and communication into what we create can only be a net win for us all! 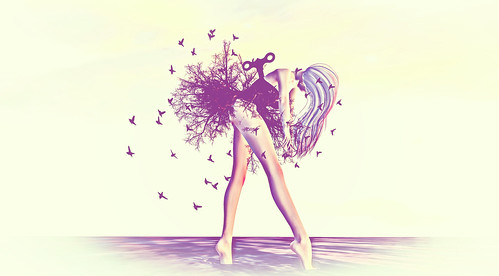 Set Me Free by Sydney Black


On a side note, the more common uses of the term appropriation are better covered by other people. I was introduced to the ideas a while ago by Adrienne Keene of Native Appropriations, and it is well worth reading back through her blog for more information. I also highly recommend reading more from people of color as they talk about the complexities of cultures when there are significant differences in power and reach. Maisha Z. Johnson does an excellent job laying out the basics on Everyday Feminism, but it's well worth doing some googling to fill out your knowledge and add awesome blogs to your blogroll. The discussion is extensive, intelligent, and worth attention, but is not what I'm focusing on here. 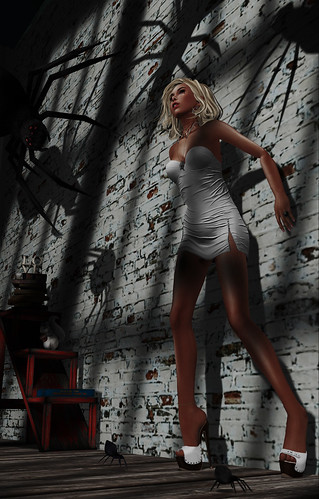 It's just a few bugs they said by Lyndzay Meili

The appropriation I'm focusing on is more akin to the idea of a long conversation throughout all forms of art, where creators are influenced by and respond to the art which surrounds us. I respond not only to the art I see within the context of Second Life but also the art I have in my home, that I engage in through different forms of media, and that I experienced over my lifetime. Likewise, when you start to look at art created around the same time, you can begin to find certain themes which are being explored from different perspectives. For example, compare and contrast Meili and Diesel's ar - above and below this paragraph. Both taken in October. Both addressing one of the creepy aspects of that season - spiders. On the one hand you have tall and lean, an echo of the moments before a horror movie climax with it's beautiful heroine; on the other, you have the spider personified and relaxed, but marked by evidence of deaths. Both are engaged with exploring our relationships with spiders, leveraging their creepiness and their proximity to death and murder but from opposite sides. Are the spiders the antagonist or the anti-hero? It depends upon who is writing the tale.

Look in my eyes by Mafalda2 Diesel

Much art is made by responding to the same things but in wildly different manners. Shakespeare, for example, is notorious for stealing entire stories off of other writers, but it's his skillful lyricism and sense of moment which take Hamlet from the story of a spoilt thirty year old who can't take action into one of the central dramas of our era. I think this repetition is actually central to our appreciation of art; by riffing on cultural touchstones and shared experiences, people can offer comment, commentary, and new perspectives which broaden our appreciation of often simple things. This cycle has its roots in childhoods of repetition - children crave the same story over and over again because their perspective on it and understanding of it changes with each run through, even if it remains the same. It also differs between people because we approach a work of art with the full weight of our experiences behind us. Then when we create ourselves we do so with our own spin on a shared story or theme. I have several stories which exist as touchstones for my development, who I identify with changing as I age through my life and experience different things. 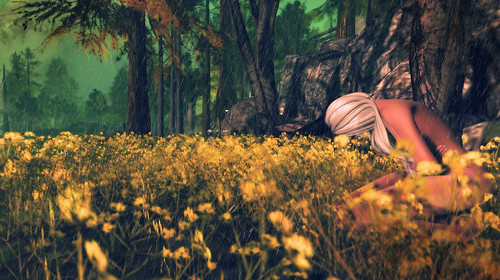 Even something as simple as a pose - sitting with arms folded and torso bent over - can be given entirely different content based on the surroundings and details of the image. Above, Andel expresses a suffering so great that the world itself responds with a wild flurry of water pelting down on the bare, bent figure. Below, in a similar pose and composition, Simon instead expresses wistfulness and regret - much more gentle emotions complemented by a muted scene. There is no way to tell from the outside to what extent the ideas of others have been incorporated, but similar themes can be found continuously across Flickr and creation in general - all part of the same long conversation. What themes and conversations draw you when you're creating? How do you balance your own individuality with learning from the strengths of others? 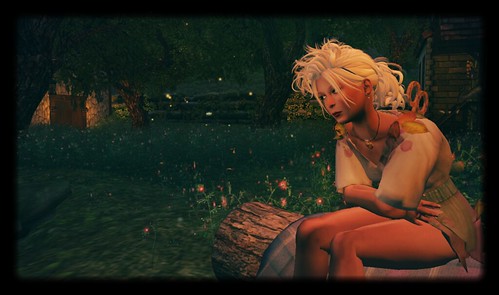 Night on the log by Laurence Simon (Crap Mariner)
Posted by Unknown at 11:50 PM