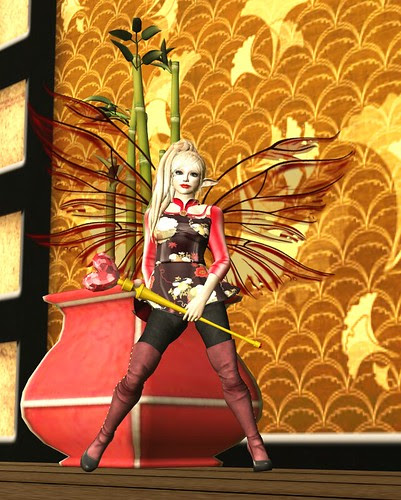 I watch a lot of anime, and have for many years now. I'm not quite a Nipponphile, but I have a great deal of appreciation for Japanese aesthetics and style; the characteristics of simplicity, purity, and nature are those sorts of universal things that can lead to beauty. Ginko leaves always make me think of Mushishi, one of my favorite anime/manga series, and a flower I made once out of ginko leaves in the fall.

Matsushima, the name of this dress/shirt from R2 Fashion (available at Collabor88), is a region in Japan that was very hard hit from the March 11 Earthquake and Tsunami, Matsushima is a collection of rocky islands covered with pines that were identified as a natural and national treasure in Japan. The Matsuo Bashō Haiku about it is particularly funny to me, since it is such an elegant way of indicating speechlessness with a twinkle hidden inside.

Each of the Matsushima dresses is styled off of a different flower, which to my untutored eye greatly resemble kimono fabric textures. This one is kiku-zakura, a type of pinkish-white chrysanthemum, rendered in a variety of shades of pink and gold. I love how starkly they stand out against the solid black of the background, making for an extremely dramatic look. I left a very red lip, a combination of L. Fauna and Mock, to match the drama, but kept under the dress simple, pulling out an old pair of pants from The Black Canary, which has been closed for a long while now. 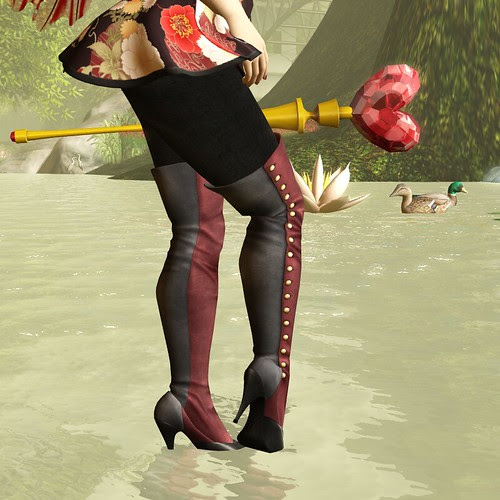 The other two main pieces of this look are also from Collabor88, which is actually how I came to the combination; shallow reasoning, but fun! The hair is a combination hair from D!va, with the updo part unrigged and the ponytail rigged mesh, combining the best of both worlds - it can be modified to fit a variety of heads, but the pony tail will remain hanging over the shoulder as one moves. It's not immediately obvious in these poses, but if you look closely you'll see how my head is moving while the ponytail remains tethered while still appearing natural. Finally, these amazing boots are from Schadenfreude; I ended up being unable to buy the fatpack at Collabor88, but the creator very kindly allowed me to purchase them directly from her. At the fatpack level, different sections can be recolored to mix and match in amazing ways - leading to these two-tone spats and bright gold buttons. I especially love the texturing and shape around the knees and ankles, where the fabric bunches a bit very naturally; it's that extra bit of verisimilitude which is the mark of a superior creation. The final touch came at the last minute, when a friend and I briefly crossed paths and he passed me a bunch of wands from Curio Obscura, available at the Arcade Gatcha Event. I haven't gotten there yet, but now that I see these awesome wands I'm hoping there's space for me soon! 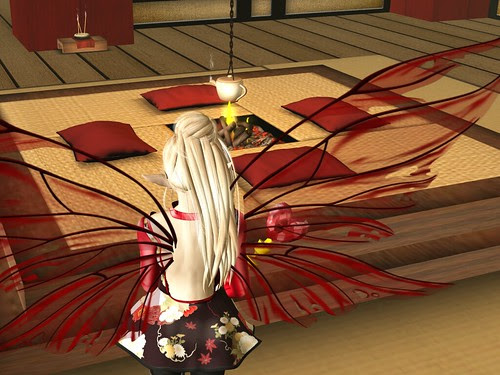