Watercolors in the Rain on LEA 29 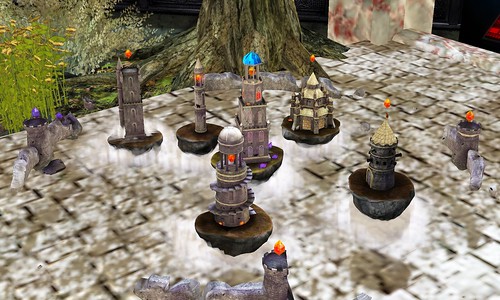 Based on a novel by David Lavigne, Watercolors in the Rain is a dreamy sim with a chocolate sky wall blocking off it's sister sims. The welcome area is a low-walled garden with fountains and a lot of information about various topics, some clearly part of the story-theme of the sim while others are more confusing. The largest signs are about the White Raven Hunt Quest; one flat gives a sample of the prizes available, but the details and how this hunt fits into the story (the white and black ravens are companions of Moxxie and Crud) only is shared once you go through the pink gate. The prize images for this hunt are flanked by two Evo*Mystic Faeries, and their inclusion here and later is also confusing, as otherwise there is no indication of fairies in the story - though one of the fairies is named "Moxxie". The colored obelisks off to one side offer teleportation offers - the first menu based, the second to the first flat, and the third to the beginning of the hunt.

The stated purpose is to bring to life the world of this story, Watercolors in the Rain, through the use of three dimensional building and interactive activities like quests and musical events. I found the builds overall lovely but the structure and purpose confusing; many of the transitions are lovely and well done - I'll note the transition from autumn to winter in particular, between The London Street and The Mountain Top Saloon (The Farm is not in between them; it is in a different direction) - but the flats are in a strange order, there are gaps between them which affect immersion, and the actual written content is bare of most interesting details while also often not matching up with the builds themselves. As a form of marketing it is confusing and left me annoyed rather than curious. As a form of art there were moments of beauty but no real emotional content besides the most perfunctory - scary wolf for fear, snowy scene for isolated, dead bodies for horror. However, if you want to find some lovely spots for sitting or spending time with friends, this is a perfect choice and others than I might be less thrown by the apparent plot. 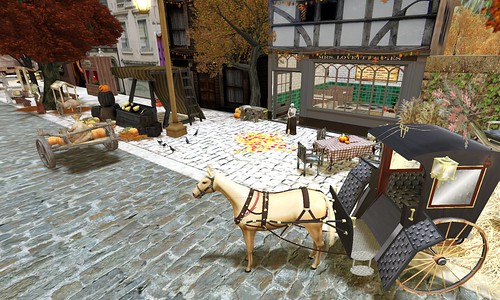 Across the sim proper are various "Storybrook Trees" which indicate an area based entirely on a chapter in the novel with a flat nearby giving some information related to the scene. This makes the sim serial and reinforces the text aspect of it while scattering characters and plot points across seven locations. I ended up making use of area search to find The Farm and Korbinian Castle, both of which were some distance from where I expected to find them. The contents of the flats themselves are confusing, many times referencing people by name before giving any description of them, or referencing mysterious strangers who may or may not be other characters introduced on other flats. Descriptions are very sparse; one might get an age or class description and a few words that might be plot, but little more. Despite running across almost all of the names more than once, I had no real sense of them as characters at all, only a vague sense of how a few of them knew each other, and no idea at all what the central plot might be.

I'm also unsure whether the flats are meant to be chronological or not, though evidence points toward not. For example, Aubrey and Pip meet on flat four but are introduced on flat one. Erica is mentioned on flat two, but is never mentioned again (unless she's one of the mysterious figures? There are three or four mysterious, unnamed people who may or may not be other introduced characters). Aubrey and Pip seem to have something to do with Jack the Ripper, but then he and they are never mentioned again. Moxxie and Crud (who seem to be the protagonists?) are mentioned several times, never described, and seem to spend most of their time meeting these mysterious unnamed people. The penultimate flat is about Moxxie, Crud, and Mordecai engaging in blood sport for the Queen Victoria and the final flat is about Mordecai going to fight in the Civil war - I have no idea how this fits together with Jack the Ripper or a reluctant werewolf of flats one and two. 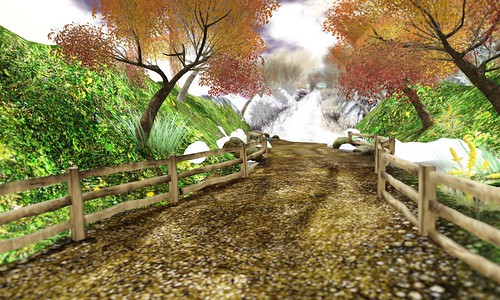 If you're interested in the story, I recommend following my links to leap between the different flats to read them and luxuriate in the lovely scenes built around them. By and large the builds are all excellent - I only found Angel's Grove confusing, as I expected a very naturalistic, magical place and got instead a bustling medieval style town around a lake. There are also several areas I presume aren't related to the plot: a lovely ride in an air balloon (after Aubrey's Mansion), a Wicca-style Hand-fasting Grove with markers for the four European elements (the opposite way from Angel's Grove), and a snowy Christmas scene complete with Santa Claus (right after The Dark Forest - mind the blood on the way!).The Hand-fasting Grove in particular is lovely, and was being used by several couples when I went through. Korbinian Castle also seems to be a club, and I suspect this is where the musical events described at the welcome area take place. 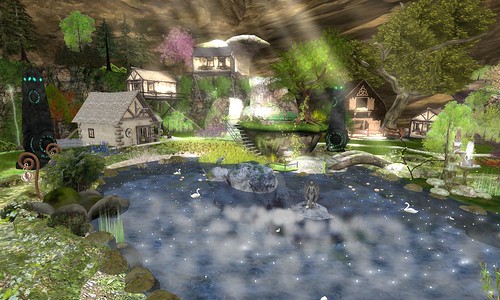 Photographed by Deoridhe Quandry
Post processing: Cropping
Posted by Unknown at 1:32 AM